The Teamgee H20 mini is one of my favourite short electric skateboards right now. In this review, I’ll show you exactly why I love it so much. 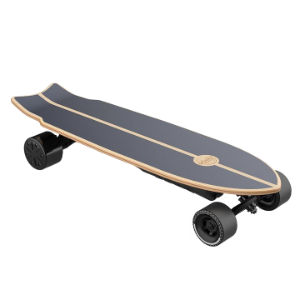 I got my hands on the Teamgee H20 Mini and I am completely gobsmacked by the quality and performance of this mini electric skateboard.

If you haven’t noticed, there’s been a big shift in the eskate scene lately where a lot of companies are starting to release mini electric skateboards.

This is great news for me because I absolutely love short eboards. And I bet there are a lot of you out there who feel the same way too.

You’ve probably seen the Evolve Stoke and the Boosted Mini and thought, geez, that’s a lot of money to pay for a mini electric skateboard.

Well, today I’ve got an electric skateboard that is both mini and affordable.

It’s only US$499 putting it square in the middle of the budget electric skateboard realm but it doesn’t feel like a budget eboard. It has top quality parts and specs to out perform some of the more premium eskateboards.

So, let’s dive deeper into those specs and I’ll show you exactly what I mean.

First of all, just look at it.
My-my is it pretty.
It has that whole surf vibe going on with the fishtail kick and the split grip tape and the natural timber running down the middle and around the outside of the deck.

It’s 31” long, 9” wide and made entirely from Canadian maple.

So it’s fairly stiff with next-to-no flex in it. I did a little bit of a flex test to show you, but I didn’t want to stress it too much because I didn’t want to run the risk of snapping it.

The deck has an ever so slight concave, which is hardly noticeable to look at. But assists in cornering and keeping your feet feeling locked into the board.

You’ve got 80mm wheels which are some of the smallest on any mini electric skateboard available at the moment.

It has generic Teamgee trucks, ¼” risers, and the bushings are barrel on the bottom and cone on top.

This set up makes the ride feel a lot like a traditional skateboard. Yes, because of the smaller wheels you do feel the vibrations coming through, but it is surprisingly not as much as some other short eboards I’ve ridden before and you could always throw on a set of Cloudwheel donuts. The risers and bushings do a fantastic job of taking on that job.

But the bushings also do a lot more than that. These are what makes this board such a dream to carve on. More on that later on.

For the electrics, the Teamgee H20 Mini is running dual 450W hub motors, the latest Hobbywing ESC and a 7.5Ah battery.

Just as they did with the H20, Teamgee gassed up on the battery which means they had to split the electronics across two enclosures rather than housing them in the deck like their previous, and still very relevant, models.

It’s a big shift for Teamgee to go from designing slimline decks with average power to enclosure decks with some serious muscle.

For most people who have never ridden an electric skateboard, you’re probably looking for the sleekest option possible because that’s what you’re used to looking at with traditional skateboards.

I was exactly the same at the beginning and eventually, the boards with enclosures started to grow on me. It also helps that the enclosures these days don’t look nearly as awful as they once did.

The remote is fantastic. For starters, it’s pretty big. For all of the size Teamgee has trimmed off the board, they’ve added it to the remote.

It’s easy to hang on to and will be a lot more comfortable for people with bigger hands.

You get four speed-modes, reverse and cruise control.

As I mentioned earlier, the Teamgee H20 mini is powered by the Hobbywing ESC. That’s the component that controls your speed, acceleration and braking. And it’s great save for one thing.

When I’m trying to accelerate from a standstill, I get this strange shuddering momentarily before it gets going.

It doesn’t happen when I kick push off and the wheels are already rolling when I accelerate. So, that’s just what in did.

I think with hub motors it’s good to kick push off as much as you can before hitting the throttle because it will improve your battery consumption and get you a better range.

You can watch a full demonstration of the remote here.

Now it’s time for the fun part. Doing all the tests.

This is where we find out what the Teamgee H20 Mini is actually capable of.

I always gear up with helmet, knee pads and elbow pads because you just never know what could happen out there. Especially when you’re testing the limits of an eboard that I’ve never ridden before.

So, out on my tests, the top speed I managed to hit was 40kmh / 25mph, which is strange considering that the maximum speed we saw was possible on the remote was only 35kmh / 22mph.

I always try to find the most level surface when doing this test, but sometimes it can be really tricky to tell when you’re out on a ride. So it’s very possible that I was on a downward slope, but it would have only been very slight for me not to have been able to notice.

Throughout my entire ride, including riding at higher speeds I rarely had any speed wobbles. And the trucks were loose because I forgot to tighten them up before heading out. Which proved to be a good thing in the end because I got to have an epic sesh carving around on the Mini.

On my range test, I rode a total distance of 23km / 15 miles. And I think that’s a great range capability.

I’m 88kg / 194lbs, the route was very flat and there were some strong winds for a portion of the ride. I rode at a fairly casual speed, however, I did test the top speed on this ride and I couldn’t help myself but do a lot of carving.

Lighter riders will likely get upwards of 25km and possibly more if they’re smart with their power saving.

The brakes are very smooth. I never once felt any jolting.

As for their strength, well, they’re good, but not great. Again, it’s just the way that hub motors are.

As it goes, the brakes on the Teamgee H20 Mini are better than most hub motor eboards. But don’t expect to come to a complete stop within metres after flying at top speed.

Just like all hub motor boards, the H20 struggled when climbing hills.

This isn’t out of the ordinary. You will struggle to find any hub motor board that can destroy hills. It’s just the nature of the motors. If you want to power up hills, you’re better off looking into belt-drives.

So, how does the Teamgee H20 Mini actually feel to ride?

It probably took about 15km before I started feeling a slight soreness in my feet while riding but that soreness is something that’s going to reduce over time because as you ride an electric skateboard more and more you’re going to start building up a tolerance in your feet.

I mentioned earlier that I didn’t get any speed wobbles while riding but I also want to elaborate on the fact that these trucks are super loose yet incredibly stable.

I tried some really hard carving on this eboard and I could whip the tail out real hard and it would just push me straight back to center.

Who Is The Teamgee H20 Mini Electric Skateboard For?

So, is the Teamgee H20 Mini electric skateboard for you?

Well, if you want an eboard that you can carve on and really get that concrete-surfing feel while having the option to go on longer cruises, then the H20 Mini is for you.

If you want crazy high speeds and insane power, or you want to be able to go offroad onto grass and dirt, then you might want to consider looking at something else.

The Exway Wave gives you the option for hub motors or belt drives. It’s a hot contender for the best short electric skateboard at the moment.

The enSkate R3 Mini is a great value short electric skateboard, especially for the price point it is at.

The Backfire Mini is a great pocket-rocket  that is compact and easy to store.

Teamgee have been around for quite a while. They started out making electronic components for other electric vehicle companies before they decided to make a move into the eskate market themselves.

Their core focus was mainly on minimal design, however, they have recently branched out into building more powerful electric skateboards such as the Teamgee H20.