The most comfortable commuter electric skateboard can now go up to 60% further on a single charge. 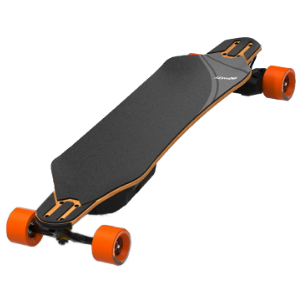 Use code ESKHUB for the $15 OFF

It’s an updated version of the original Exway Flex which is also still available, so you can check out my review of that one and compare the two of them.

I have the Flex ER belt version, however, you can also get it with hub motors if that’s more your style.

The major differences between the two is that hub motors are much quieter and require less maintenance, while belt-drive motors are more powerful and have more options for wheel customizations.

The Exway Flex ER is for eskaters who commute to work or school and need an electric skateboard that is agile enough to make sharp turns while maintaining stability at high speeds.

The ER in its name stands for Extended Range, so this iteration of the Flex lends itself to riders who may have longer than average distances they need to travel in order to get to their destination.

The most prominent difference between the original Flex and the ER is the size of the battery.

This Flex ER has a 314Wh battery which is 60% bigger than that of the original Flex and directly translates to a 60% increase in the range of up to 28 miles / 45km.

Interestingly, the Flex ER is running dual 1000W belt-drive motors which is a downgrade from the 2x 1500W motors that were on the original version.

Despite this, the Flex ER still has a higher top speed of 28mph / 45kph.

And all of this is controlled by an Exway customised Hobbywing ESC and remote control.

The remote is the same remote Exway has been using for a long time now, and I’m glad because I wouldn’t change a thing on it.

It has a small screen that displays the essentials at a glance, like current speed, battery levels for the remote and board and the speed you’re in.

They keep the remote simple because they also have the Exway App that can be used for more advanced customisations and details.

And this is where Exway really sets itself apart from the competition. Their app is powerful and very useful. I find often myself tinkering around in there, customizing the eboard’s performance specs to suit my personal riding style.

The app is so feature-rich that I have a whole video dedicated to it which goes into detail about every feature on the app, so definitely give that a watch because I think it’s one of the best reasons to buy an Exway electric skateboard.

The deck, as the name suggests, is super flexy.

Made of a composite of bamboo, maple and fibreglass, it is able to provide flexibility that helps to absorb vibrations, cracks and bumps in the road while ensuring durability in the long run.

It has a deep concave shape with flared edges in the areas you place your feet which helps you to control the skateboard and makes turning really easy.

To further increase comfort, it has shock-absorbing grip tape which is almost a must-have on electric skateboards these days.

The Flex ER also has bash guards fitted on the nose and tail which I think is a great added piece of value. These protect the deck from scrapes and dents that usually occur when you’re carrying the board and resting it on its end.

Or if you happen to come off the board and it goes flying into a curb or fence, it’s that extra safeguard against damaging your deck.

The Flex ER is fitted with Exway’s famous 8” 45° reverse kingpin Trist trucks and they’re some of my favourite eskate trucks.

They’ve consistently proven to be reliable, durable, agile and stable.

The wheels on the Flex ER are 85mm 76A Polyurethane street wheels with a 56mm ground-contact area.

They are very squishy and have a lot of grip on the roads.

I get a lot of electric skateboards which all take up space in my shed, so I have to constantly be getting rid of some eboards in order to make room for more.

However, there’s one, and only one electric skateboard that I’ve kept since the beginning and that is the original Exway Flex.

The Exway Flex and the Flex ER are very similar electric skateboards when it comes to how they ride, so it’s no surprise that I really enjoyed riding the ER.

When you first step on the board, you’ll instantly notice the size of the flares. They really let you know they are there.

And once you get acquainted with them you’ll be very glad they are there.

They are so helpful when riding.

Not only do they make it easy to make tight turns, but they assist you when carving.

It is such a great feeling to be able to throw the tail of the board out and be able to catch it and bring it back to the centre with the help of those deck flares.

The wheels stick to the road when taking turns at high speeds and I never felt like the board was going to slip out from under me.

The combination of the flexy deck, foam grip tape and the soft wheels makes this by far, one of the most comfortable street electric skateboards.

If you were to chuck on a set of Cloudwheels, which is exactly what I’m going to do, it will be amazing.

The remote is easy to use and the thumbwheel is very responsive. I didn’t feel any jolting in the acceleration or braking and I always felt confident on the eboard.

When I was testing out the top speed, I didn’t once get any speed-wobbles, nor did I feel like the board was on the verge of getting them. Honestly, I’m astounded by the stability of these trucks and bushings.

I did my regular performance tests, however, it was really windy on the day which has definitely affected the results.

Initially, I was surprised, however, I went back over the data and saw that the route was quite hilly, I rode really hard in speed mode 4 for most of it and I did a lot of carving. All of that combined with my weight and the windy conditions bought my final range number down significantly.

I wasn’t satisfied with the test because there were just too many variables going on that day, so I went out the next day for a shorter ride at a more reasonable speed to see how that would affect range.

Because I was short on time, the plan was to ride for 15% of battery usage and extrapolate the results to estimate the final range. This time around, I rode on only flat ground, in speed mode 3 averaging around 15kmh and I got 4.2 miles / 6.8km.

Doing some quick math, by these numbers, I would have gotten bang on 28 miles / 45km.

Now, I understand that’s not a perfect test because batteries tend to perform better the closer they are to full, so the miles per Wh at the end of the ride tends to be a bit less.

I’ll do a complete range test in the future when I have time, but for now, that’s the best I’ve got.

It’s also good to just see how much other factors can affect the total range of an electric skateboard.

A small and often overlooked feature is the auto power-on where you just turn the remote on which turns the board on and you’re ready to go. No more fumbling around underneath the deck trying to turn the board on.

What Could Be Better

There is one change they made that I didn’t like and that was the removal of the LED lights around the power button on the board.

On the original, you could click that power button once and the LEDs would light up to indicate how much battery was in the board.

That’s no longer there, so now you have to turn the remote on, which in turn powers on the board in order to see the battery level via the remote display.

It’s a small gripe, but something I’ll miss.

Overall, the Exway Flex ER is a fantastic electric skateboard.

The Flex ER is a slight upgrade to the original Flex and comes in at the same starting price as the original was at the time of its release.

For commuters, carvers and cruisers, the Exway Flex ER is a great choice. 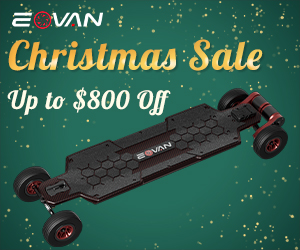