The new electric skateboards from industry veterans, Boosted, are a refreshing change to their lineup. With a much shorter deck, the Boosted Mini's are now more like a skateboard rather than a longboard. 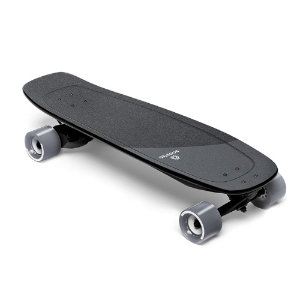 I’ll be straight with you. I might make a commission from some of the links in this article. But I would never recommend anything that I didn’t believe in or compromise my opinion just for money. It all goes back into helping to support this awesome website!

The eskate industry for a long time has been dominated by electric longboards with no decent skateboard options.

And that’s fine because I don’t think the innovation and research would have been as viable if companies were trying to cram these monstrous batteries and motors onto small boards.

People just wouldn’t have taken to them as much.

As more and more riders are looking for portable and agile options, the board companies need to respond.

Currently, there are only a handful of good quality skateboard-sized eBoards.

TLDR; The Boosted Mini S and Mini X are some of the best electric skateboards you can buy right now. Yes, they are at the higher end of the price range, however, you’re paying for quality components and reliability along with a solid brand you can trust.

The third generation of Boosted boards are made entirely in-house. Well, they aren’t using any outside skate company components, unlike their original builds.

I’m very interested to see how durable their new boards are compared to their older ones.

The Boosted Mini’s come in two options and are very similar in a lot of ways.

First of all, they both have the same deck. It’s what Boosted are calling their deep-dish composite deck.

It locks your feet securely into the deck to give you the ultimate feeling of control while riding.

And makes for super silky carving.

The deck is made up of a poplar wood core to keep it lightweight, wrapped in triaxial fibreglass for strength and lined with polymer sidewalls to resist any impact and seal the board.

There’s no flex in the Mini’s deck. Mainly because it’s just too short to offer any flexibility between the front and rear wheels. Plus, the casing under the board takes up a ton of space.

The new Mini’s have a kick-tail. A staple on many skaters’ decks.

The kick-tail adds an extra layer of control and manoeuvrability to the board with the ability to tic-tac around the tightest of corners.

Boosted have named their wheels the Lunar 80mm and they are the same on both boards, except for the colour. The Mini S has orange wheels, similar to the old Boosteds, while the Mini X is fitted with a grey set of wheels.

The wheels are really soft which is much needed to cushion your ride, considering the lack of flex in the board.

The Mini’s are boasting a new design of 190mm CNC’d trucks made from a high grade aluminium which make them extra strong.

The drivetrain on both Mini’s are fitted with 1,000W motors fixed to metal pulleys. A decrease in power from previous generations of Boosteds, however, the speed difference hasn’t dropped all that much.

So, that’s where the boards are similar.

But what about their differences?

The two versions of the Boosted Mini really only differ in one area, and that’s the battery.

On the Mini S, you get a standard battery that has a max range of 7 miles. While the Mini X comes with an extended range battery which will get you 14 miles.

You would think that you’d be able to swap out the standard battery on the S for the extended range but apparently, they are ‘incompatible.’

Although, I have heard stories around the net that people have managed to put the extended range battery on the Mini S and it all seems to work fine.

But I don’t recommend doing this as it could have other unforeseen issues down the track.

Also in the box when you receive the Boosted Mini is a controller, skate tool, charger, wrist strap, USB cable and manual. Really, the bare essentials.

The biggest gripe people seem to be having is why the Mini S has a lower top speed to the Mini X.

Some people on the internet are speculating that Boosted are software limiting the speed on the Mini S.

Which could very well be true.

Or maybe it has something to do with the ESCs in the boards.

I haven’t been able to find the answer just yet. Let me know if you do have an answer.

Aside from that, there aren’t any major quarrels I have with the Boosted Mini’s. I actually love them!

Anticipation for new Boosted’s was high in the community, so it’s safe to say people are excited to see something amazing!

Here’s what I found:

The Mini’s are just as they are named – Mini. They are the perfect companion for any city dweller, or for anyone wanting to add a little more style to their ride.

On top of the Mini’s, Boosted also have two other electric skateboard models. They are the Boosted Stealth and the Boosted Plus. Learn more about them by clicking below.

The Teamgee H20 Mini is a robust short electric skateboard that challenges most boards when comes to range capability.

The enSkate R3 Mini is a great value short electric skateboard, especially for the price point it is at.

The Backfire Mini is a great pocket-rocket  that is compact and easy to store.